Shown below are photographs of some recently commissioned pens. These include some of the special order historic woods in addition to our standard materials.  If you would like something similar, please don't hesitate to contact us for a personalized quotation. 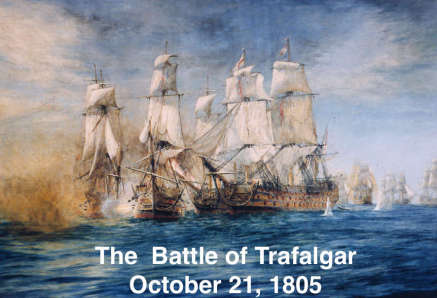 The HMS Victory is a 104-gun, first-rate, ship-of-the-line of the Royal Navy.  It was ordered in 1758, laid down in 1759, and launched in 1765.  She is best known as Admiral Lord Nelson's flagship (flagship of the First Sea Lord) at the Battle of Trafalgar in 1805.  Admiral Lord Nelson led twenty-seven British ships of the line and defeated thirty-three French and Spanish ships.  During the battle, Admiral Lord Nelson was shot by a French musketeer and died three hours later on the deck of the Victory.  In 1922 the HMS Victory was placed permanently into dry dock in the Portsmouth Naval Dockyard, where she remains today.  Over 25 million visitors have visited her as a museum of the sailing navy and the oldest commissioned warship in the world.  She is the only surviving line of battle ship from the Age of Sail.

The following photographs are of a rollerball pen made from the HMS Victory wood described above: 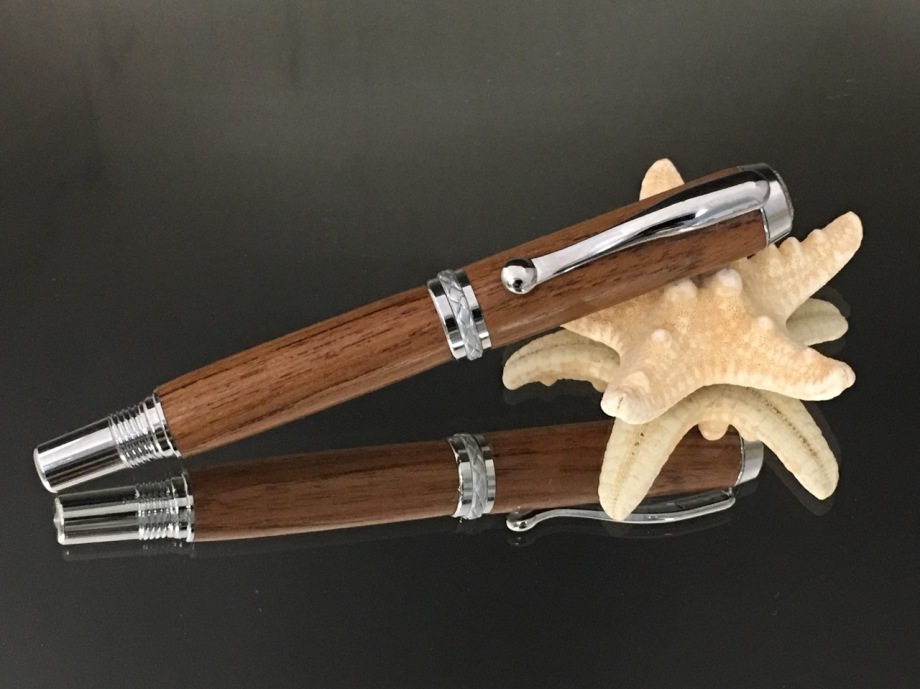 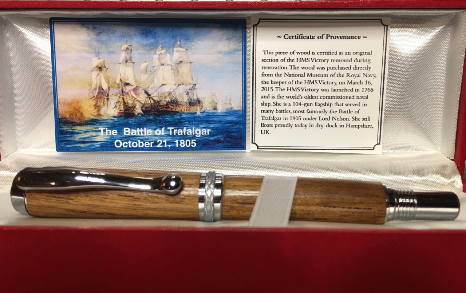 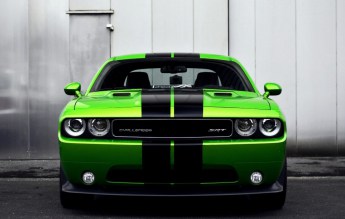 A customer recently purchased a new Dodge Challenger Hellcat and wanted a pen to match the bright green color on his Hellcat.

This is what he got - a 5 speed gear shift pen! 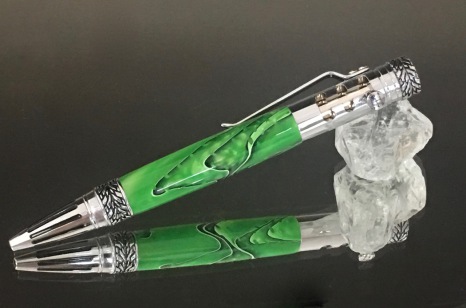 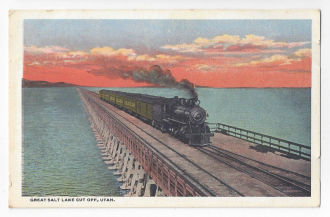 The Lucin Cut-Off was a train trestle of the Southern Pacific railroad and went from Lucin, Utah to Ogden, Utah and was built across the Great Salt Lake in Utah.  Construction started in August 1902 and the trestle was put into service on March 8, 1904.  It saved 43 miles of travel distance around the lake.  The curves and grades eliminated by this engineering feat saved enough power in moving such a train to carry a man 400 times between New York and San Francisco.   The trestle started to go into a decline in use starting in the 1960’s and in 1993 dismantling and salvage of the trestle began. 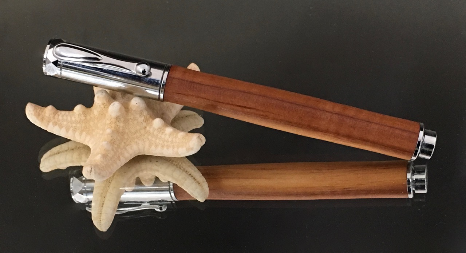 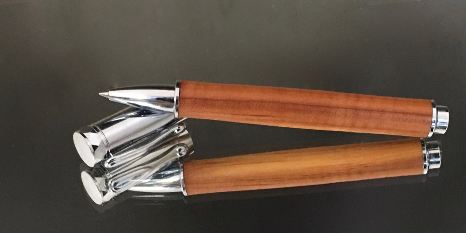 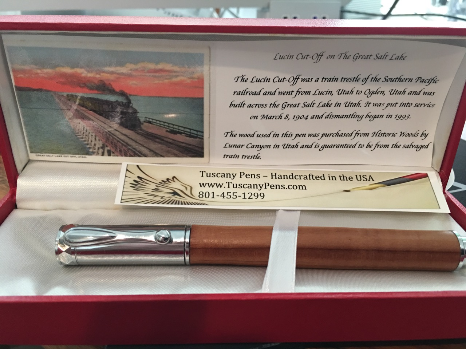 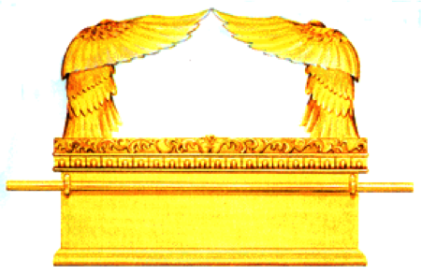 Shittim (pronounced Shi-teem) Acacia wood from the Sinai Desert was the wood that was commanded to Moses in the construction of the Ark of the Covenant:

Exodus 25:22 "It was made of acacia or shittim wood, a cubit and a half broad and high and two cubits long, and covered all over with the purest gold. Its upper surface or lid, the mercy-seat, was surrounded with a rim of gold; and on each of the two sides were two gold rings, in which were placed two gold-covered poles by which the ark could be carried."

The two pens below were a custom order
for the same customer: 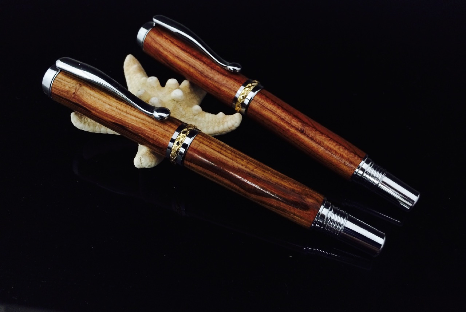 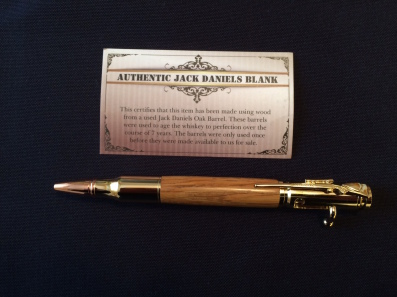 This bolt action pen was made from a genuine barrel stave from the Jack Daniels distillery.  You can read more about these staves and see  video tour of the Jack Daniels Distillerye: http://www.tuscanypens.com/collezione-toscana-limited-edition-historical-pens-page-4/ 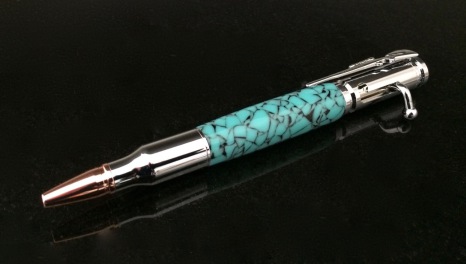 This bolt action pen was made from crushed turquoise and the pen done in chrome at the customer's request. 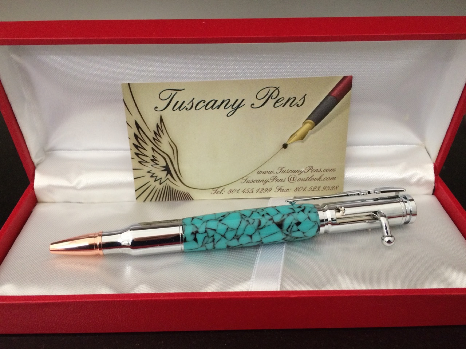 The following pens were made to pay tribute to tribal elders of the Seneca and Ute tribes.  They have magnetic caps that post to either end of the pens.

The Seneca pen shows the flag of the Seneca Nation of Indians - Keeper of the Western Door and the Seneca story of creation.

The Ute pen shows the Great Seal of the Ute Indian Tribe and the Mountain Rose. 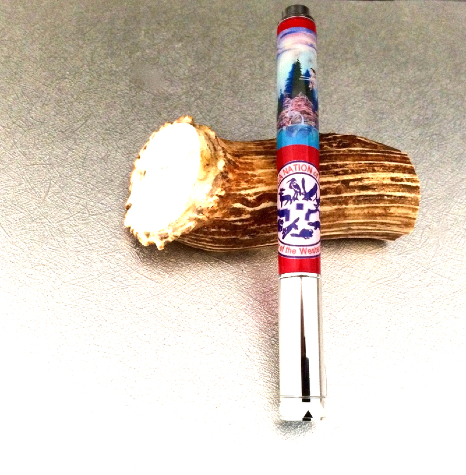 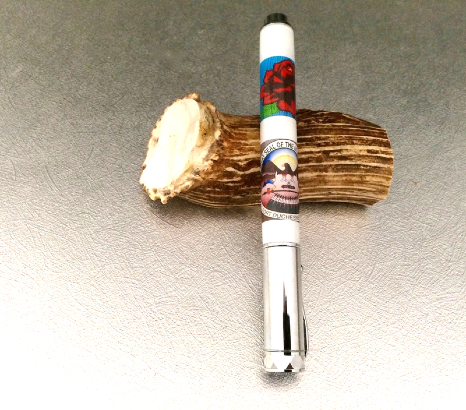 SHIPWRECK WOOD FROM THE GREAT SALT LAKE: THE W.E. MARSH NO. 4

The W.E. Marsh No. 4 was part of the Southern Pacific Railroad fleet used to help construct and then maintain the Lucin Cutoff trestle across the northern end of the Great Salt Lake in Utah. See our write-up of the Lucin Cutoff by clicking here.

The W.E. Marsh No. 4 was built in 1908 and last seen afloat on the Great Salt Lake in 1936.  This past Spring, the low waters of the lake exposed the remains of the boat.  Some of the wood was salvaged as shown in the photo below.  To preserve the wood, it was stabilized in a special acrylic solution under vacuum for 48 hours.  It was then turned on the lathe to produce the two bolt action pens shown. 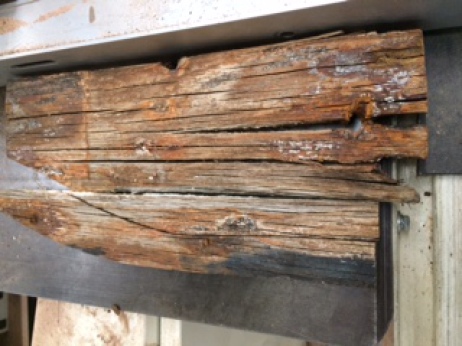 This photograph shows a portion of the plank salvaged from the W.E. Marsh No. 4 before it was treated and stabilized. 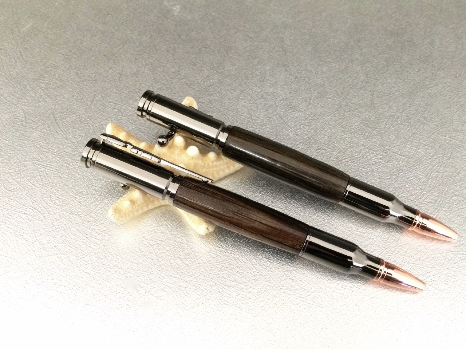 PAIR OF BOLT ACTION PENS MADE WITH THE SALVAGED WOOD FROM THE W.E. MARSH NO. 4

Commissioned by a local dentist (no, it's not a real tooth!), this pen features an acrylic tooth that has been cut out and inlaid into the body of the pen.  It is a ​ballpoint twist pen that has a Schmidt refill.  There are enough blanks to make 3 additional pens. 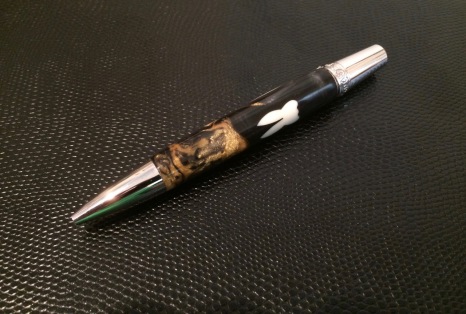 Made with a genuine Harley-Davidson medallion supplied by our customer, this rollerball is done in the "steampunk" style that compliments the medallion. 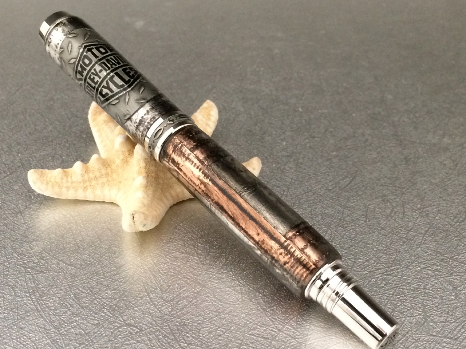 The following pen was commissioned to commemorate the 50th Anniversary of the Vietnam War.  It is a gunmetal bolt action pen with the body in African Blackwood and dyed Holly for the Vietnam Campaign Ribbon: 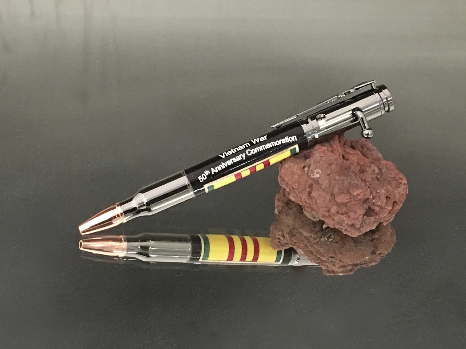 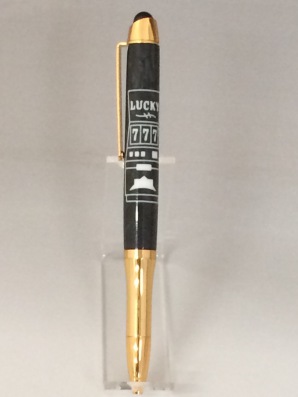 A jackpot winner at a nearby casino ordered a pen to commemorate his luck.  The body is black acrylic with the slot machine inlaid in white acrylic. (Sorry, we can't tell  you where or  how much!)

Your form message has been successfully sent.

You have entered the following data:

Please correct your input in the following fields:
Error while sending the form. Please try again later.
Return to top of page